Those of you, who have been among the prize winners this season, will have seen that instead of the normal range of red, blue, green & yellow, our rosettes are currently a very attractive silver.  This is because our sharp-eyed membership secretary noticed that this year is the 25th Anniversary of Vectis becoming affiliated to the B.H.S. Riding Clubs Association and, incidentally, my 25th year as Chairman.  We were formed 2 years before this, when a small group of us, having served our apprenticeship with the Isle of Wight Riding Club, decided we would like to start a new Club with an emphasis more on dressage and training.  Our first Chairman was Chris Foulkes who still helps at many of our events.  However, when he had to go to the mainland for his work, I took over.

We became affiliated, mainly to compete in Area competitions and hardly a year has gone by when we haven't qualified a team or individual for one of the Championships and in 2002, we won the Riding Clubs National Show Jumping with a team consisting of  Jackie Woodford, Jenny Morris, Julie Wannop and Teresa Pitman and we had individual Dressage Champions when Sally McIntosh won the elementary championship on Charisma and was individual champion again in the novice on Barcarole and, also, when Carla Maskell riding Be fine won the individual novice championship in 2005. 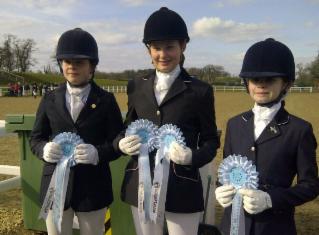 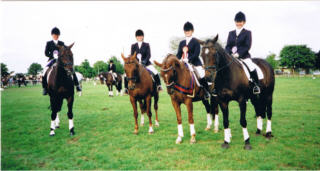 With the recent addition of  junior members, the Club's successes have been broadened by our juniors qualifying for this winter's dressage Championships and Jodie Reay winning her section.

Let's hope Vectis riders can keep going to the Championships in the years to come.

I see that Robert's training sessions were an important part of the Club's programme even then. How has he managed to maintain his enthusiasm over all those years?We have, also, had many trainers visiting from the mainland, the most recent being the very popular John Lasseter.

In 1993 and 1994 we held a dog show at Cranmore and I think we said never again.! Also in 1993, we held the first of several Horsemasters Competions when riders rode  a test on their own horse and then swapped horse.  This continued successfully for a number of years until someone of a rather large nature, drew a pony of a somewhat lightweight frame and we all worried we would have to administer oxygen to the pony after the test.

The first reference I found to the Annual Quiz was in 1994 when  Sharon Peach set the questions and Malcolm Purcell was the quiz master and this continues to be a very popular annual  event with teams from many other clubs.  So far, we haven't been able to win it ourselves.

We  held our first affiliated dressage in 1998, thanks to the efforts of Laura Windle.  This meant that for the first time riders could qualify for area championships without having to travel to the mainland. At the end of that year the Island had 17 B.D. Members. A more recent addition to our activities has been endurance riding under the expert eye of Anna Lek.  Again, we have been lucky enough to qualify each year for the Championships.  If you haven't already tried it, give it a go this year.

For several years, we ran the very popular Vectis Team Challenge, organised by Linda Allen's daughter Kirsty.  This consisted of 4 team members with a variety of elements over the years including, at various times, reversing a land-rover and trailer and driving a quad bike through a timed course.  A phase which brought out the competitive spirit in some of the male participants to such an extent we thought they would all end up in A. & E and our Committee being summoned before Health & Safety!   For many years, we held the very popular 'Come Prancing' at Brickfields, which involved members and varying friends and relatives dressing up in some amazing costumes and doing dressage (of a sort) to music.  We had Star Wars, Mary Poppins, Cowboys & Indians, Fairy Queens and all sorts of film and music characters.  Some of the horses were incredibly stoic about being covered in tin foil and stars; while others proved a little worked up.  Sadly, our long association with Brickfields will soon be ending as it will be closing later this year. 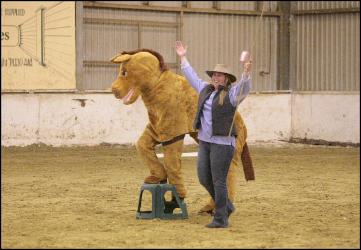 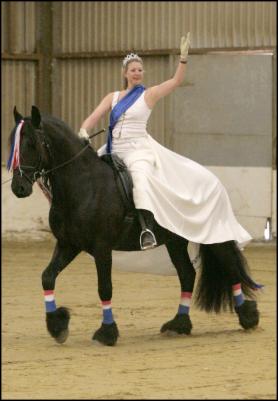 The first Annual Dinner for 18 was held at The Countryman (then the pub of Jane & Roy Frost), it then went to The Snooty Fox (Jackie & Richard Cook) and latterly to The New Holmwood where up to 50 of us now enjoy a very good meal and then make fools of ourselves playing raucous games.

Another recent innovation is The Horse of the Year Competition sponsored by Froghill Tack and which adds an added interest to all of our summer events with some very keen competitive spirit from some of our members; points being awarded for success in dressage, jumping and endurance.

Over the years we have been very lucky to have some very generous landowners who have allowed us to use their facilities, free of charge; some enthusiastic and hard working Committee Members and Members who make it the friendly and fun Club that it is.

As you can see some of us don't retire easily!